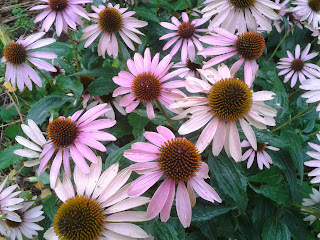 A very stretchy month, this, one foot lingering in summer, the other striding impatiently on towards autumn.  For the first few days (is it really only a few weeks ago?) we're blessed with fine weather and high temperatures, the sun so fierce even I have to look for shade, and the visitors keep on coming.  The air is heavy with mysterious lemony and peppery scents.  Near the Brookside gate, armies of Michaelmas daisies are still massing, looking a bit the worse for wear but they're not giving in yet.  Around them - camp followers or local colour? - tall nicotiana sylvestris loll insouciant: they're browning at the edges now but if they know they don't care.  And clumps of echinacea are hanging in there, the vivid pink of their petals fading to old linen, papery white.  As the colour drains out of the petals it seems to creep into the central cone which glows with a greenish intensity. 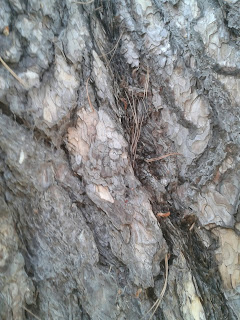 The season demands you look up.  Trees that one day sport a streak of red and gold turn overnight to flame.  The sweet buckeye, aesculus flava, and its neighbouring acers lead the way.  Once I do look up, though, I find I'm seduced by those that keep their colour and their leaves.  One morning I deviate from my usual route, setting off along the West Walk as far as the old main gates on Trumpington Road, where the steps are bright with pots of purple verbena bonariensis (thanks to all who helped with identification) mixed with the reds and oranges of dahlias bobbing about in the breeze, poking their noses in to everybody's business.  Here I turn left along the Main Walk as far as the crossing with Henslow Walk.  The conifers that line the avenue reach a sort of climax at this crossroads, with four colossal specimens, one on each of the four corners.  I have the place to myself, apart from a woodpecker and a bunch of magpies chattering somewhere, and I want to get to know these trees a bit better.  I step off the path onto the impacted earth under one of these giants, cedrus atlantica, Atlas cedar, expecting a hard surface.  Instead, it's as if a woolly blanket has been spread beneath my feet, the long straw-coloured curves of dead needles creating a soft, springy carpet.  What would it feel like in bare feet?  In Four Hedges, Clare Leighton takes us to task for 'lazily' looking at things, missing out on the 'vast range of emotion' available to us through our other senses, so I run my fingers over its ridged bark and then move on to the Crimean pine, whose bark is softer and scalier.   I continue the touch test on the cedrus libani  and then on the giant redwood, at just over 30 metres the tallest tree in the garden and one of the oldest, grown from the first seed brought into this country by Cornishman William Lobb in 1851. 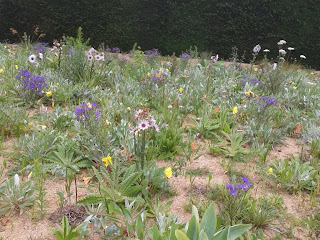 There's plenty to catch the eye on the ground, of course.  By accident I come upon the new perennial meadow planting just to the east of Cory Lodge.  Designed by James Hitchmough, Professor of Horticultural Ecology at Sheffield University, it relies on drought-tolerant plants which will knit together to flower from April to October.  At present it's a surprisingly rich tapestry, predominantly purples and salmon pinks and yellows against the dark background of the yew hedge.  In the bee beds, the sherbet yellow of the snapdragons contrasts with the crushed raspberry of the sedums.  Springing
up everywhere in shady spots are tiny cyclamen, white, palest pink and every shade of purple, like stars or jewels in the dark ground.  And autumn crocus appear here and there, standing gamely, almost upright, on such slender stems.  They're easily floored by wind and rain, 'but how gently they lay their heads down flat on the grass to die, making of death a gracious thing': Clare Leighton again.

There's so much to read and so much fine writing I'd love to emulate, without simply repeating what's been done so well by others.  Hence my woeful vagueness when I'm asked - as I am more and more often now that I'm becoming a more familiar face around the Garden - 'So what exactly is it you're doing?'  'Um...' is usually the best I can come up with.  I suppose I'm interested first to explore what the garden - and this Garden - means to each of us, and how it fits into our experience of the natural world; and secondly, how best we might record our experiences.  In theory my focus is the journal, the kind of record that writers and gardeners over the ages have chosen to keep.  So I'm reading everything I can get my hands on, from Dorothy Wordsworth to Derek Jarman, Vita Sackville-West to Virginia Woolf, Alice Oswald, Katherine Swift, Mrs Loudon...  Tomorrow it's Beth Chatto and Emily Lawless.  Also now on my list are the opening of Hilary Mantel's Beyond Black (thanks, Paul) and, courtesy of friend and poet Clare Crossman, Jean Sprackland's Strands; also from my friend Tim a sequence of articles on Linnaeus and Tim's copy of Linnaeus's Lapland Journal, which I'm hoping he'll let me borrow.  In the last couple of days I've encountered three pieces which are so impressive that I've been tempted to put down the pen for good.  Sarah Hall's 'Mrs Fox' was the first of five stories short-listed for the BBC National Short Story Award broadcast on Radio 4 this week.  A fellow-Cumbrian, I've been following her career with interest and some envy.  She's really prolific and, as far as originality goes - well, you could listen on iPlayer.  Second was the opening page of Tim Dee's Four Fields - wonderful.  And then, yesterday evening, a Twitter feed sent me to Helen Mort's new poem 'Passing Places' - wow!

I'm not giving up, though, not yet.  I still have a headful of impressions that haven't made it onto paper - the smell of cut grass, the dead bird (head missing) that Laura found this afternoon, the high-tech world of the experimental glasshouses with their automated shade and temperature control and the mist machine, cafe mums, the sound of a penny whistle across the big lawn... This morning there's a nip in the air and - yes, definitely mist as I cycle across Parker's Piece, autumn 'showing the marks of its fingers' in the dew on the grass is how Clare Leighton puts it.  The sun, when it comes, has lost the ferocity of the start of the month - more like a warm caress than a hammer blow.  And I think the
echinacea may have had its day for this year: two gardeners are digging just behind it in the bed on the Lynch Walk.  Perhaps it's this sense of endings which makes this such a famously melancholy time of year?  It seems easy to slide into nostalgia: memories of meetings and re-meetings, and a kind of amorphous longing for woodland walks and tea and toast and log fires...


Posted by Kate Swindlehurst at 14:20