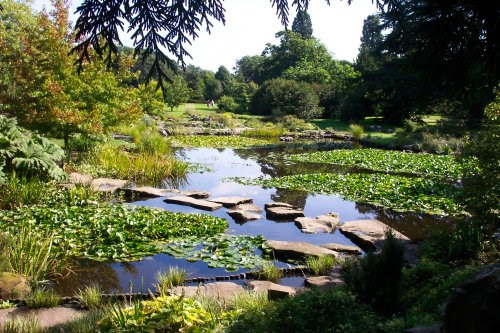 Ten days into a year as Writer in Residence* at the ‘Botanics’ and I’ve dipped in a toe or two: a few pencil notes in the pretty ‘journal’ I bought along with a small plant in the garden shop on Day One, a couple of talks on the Tudor garden by Twigs Way (really), and some hours spent recording stories for the Voicing the Garden project on Saturday.  Time now for a real dip – or a good paddle at least.

The Oxford English Dictionary defines residence as ‘a person’s home, especially a large and impressive one’ and the Cambridge University Botanic Garden is certainly that, so that I’m feeling overawed rather by the expanses of lawn and bed and woodland as well as by the size of the task: what have I taken on?!  I suppose there is an echo of the official residence, too, in the fact that I am here in some sort of professional capacity.  I think of the phrase ‘taken up residence’ as I creep rather self-consciously in through the Station Road gate this morning – will those who ‘really’ work here think I don’t have a home to go to?  The dictionary gives the origin of the word as late Middle English (denoting the fact of living in a place) from Old French, or from medieval Latin residentia, from Latin residere 'remain'.  I like this: for now, for the next eleven and a half months in fact, I’m staying here, doing my best to make myself at home.
The weather’s not very welcoming, cold and grey and not quite raining but a robin fluffed up against the mean wind shouts out my arrival.  I am excited that I am able to guess the bird from the song.  For years I have loved the sound of birdsong, often waking at first light to the rich pleasures of the dawn chorus.  But I have never managed to identify more than the obvious pigeons and gulls from the way they sing.  I have a similar block when it comes to tango music, years of pleasurable listening leaving me not much further forward when it comes to recognising a particular orchestra.  I think being resident here will help me learn to observe, to tune in to the sights and sounds around me, to practise new ways of listening.

I have been reading Derek Jarman’s Smiling in Slow Motion, immersed in his writing each morning on the bus to and from Addenbrookes as I approach the end of a course of radio therapy.  I think of a recent tango lesson, the teacher describing the final stage of the ocho, the figure of eight, as the beginning of the next figure.  Jarman’s journal is an extraordinary record of, almost a meditiation on, his garden, his art and film work, his social and sex lives, his relatonship with his partner and his struggle with AIDS.  I find it funny, touching, shocking and tender by turns, but always absorbing.  I love the characters that move through the pages, the luvvies and the fluffers, Gingerbits and Sister Latex of the Immaculate Protection rubbing shoulders with Mrs Jekyll and John Gerard, his passion for colour, his fearless openness.  He has no time for our ‘national inability to describe our sex lives’, pronouncing it ‘pathetic’, and is equally scathing towards the way the National Trust ‘tarts up’ its properties and the way Gay Times (‘on the fringes of intelligence’) settles for the ‘false hope’ of the positive image: life was ‘not The Sound of Music; if you climbed a mountain it was a sweaty affair and you might not reach the summit'.   His fury at the way society has marginalised ‘queers’ such as himself is matched by his many passions: for colour, for the strange landscapes of Dungeness and above all for his garden.  In March, he describes it ‘putting on the colours of spring, the inky purple Crambe maritime uncurl like medieval capitals, sap-green elder, pale-blue rosemary flowers, garlic racing with the iris, crocus punctuate purple and yellow’; in June, he watches cabbage whites ‘dance’ in the magenta valerian and watches a poppy open: ‘Opium poppies  shed their petals as you blink, their dusty colours almost a little sad, dreamy, contrasted with their scarlet cousins and the harlequinade of their Californian relatives’.

I am in equal parts excited by the world of lovely plants which I am about to discover and embarrassed by my ignorance: but I remind myself that the expertise on which this garden has been created has come in part from learning by observation and enquiry; ‘that was how Darwin learnt, after all,’ Hilary Sutton said speaking about her work as a volunteer with school visits here.  And the garden now welcomes everyone, so it seems fitting that at least for some of my time here I’m happy to sit in the cafe with my laptop and let the human aspect ebb and flow around me.  The notion of expertise is a strange one.   Chatting to Sarah last night over cocktails (Caipirinha a delicious first for me) in a belated birthday celebration, she spoke about a book she was reading which identified three stages in the art of photography: the first where you are faced with an array of techniques and information and simply try to keep up; the second where confidence arrives suddenly, and you accumulate skills and expertise with apparent ease; the third, when you throw out the lot and start again from scratch.  The model certainly holds good for the process – it is a process – of Argentine tango; I have a feeling it might apply equally to this residency, and more generally to the whole life thing where, as for tango, I am clearly at that starting again stage.  As for being – becoming – a botanic gardens writer in residence, the beginning of the beginning...

‘So what does it actually entail?’ almost everyone asks when they hear about this latest venture.  The question reduces me to an extreme version of my usual incoherent vagueness.  The honest answer is I don’t know.  It’s an exploration and for once I’m going to try and be brave enough to manage without maps.  In any case, this has never been done before.   Of course there have been other residencies; there may even have been a writer, or writers, in residence at the Cambridge gardens previously; but not me.  This combination – the Botanics and me – is a new and unique enterprise which I am hoping might help me to join up some of the dots: my interest in memory, in routes to health and well-being, in the natural world.  Fact or fiction?  Um – somewhere between the two?  How best to document what is unfolding in the world around me, to capture the rhythms of the seasons?  As well as learning to look and listen, I find myself reading voraciously, growing a list of garden notes and writer’s diaries and logs of personal journeys.  Who knows where my journey will lead?

Planting myself in this corner of the café has already attracted some welcome attention.  Helen stops by, yellow plastic bucket in hand, on her way to – I think she is in charge of alpines – and we compare notes about Saturday’s recordings.  Then I am spotted by Anna the yoga teacher who introduces me to her friend Kat and we trade stories.  Anna is immensely excited by my new role and wants to put her name down for the first workshop!   I remind her I am still a new cutting: I need a bit of time to ‘take’.  Later a young man with an impressive array of notebooks joins me at the other end of the table.  Today there is a noisy influx of visitors – one group or several? – and the table I have claimed acquires a ‘reserved’ sign for later.  For now, though, I sit tight.  I have a fantasy that, if I sit here for long enough, some of the job might come to me, a bit like an MP’s surgery – I’m here for questions, referrals, advice, support. Perhaps the café staff will gather to create a series of cake haiku?  Or a bunch of beleaguered mums dump their noisy offspring for a quick injection of word play? 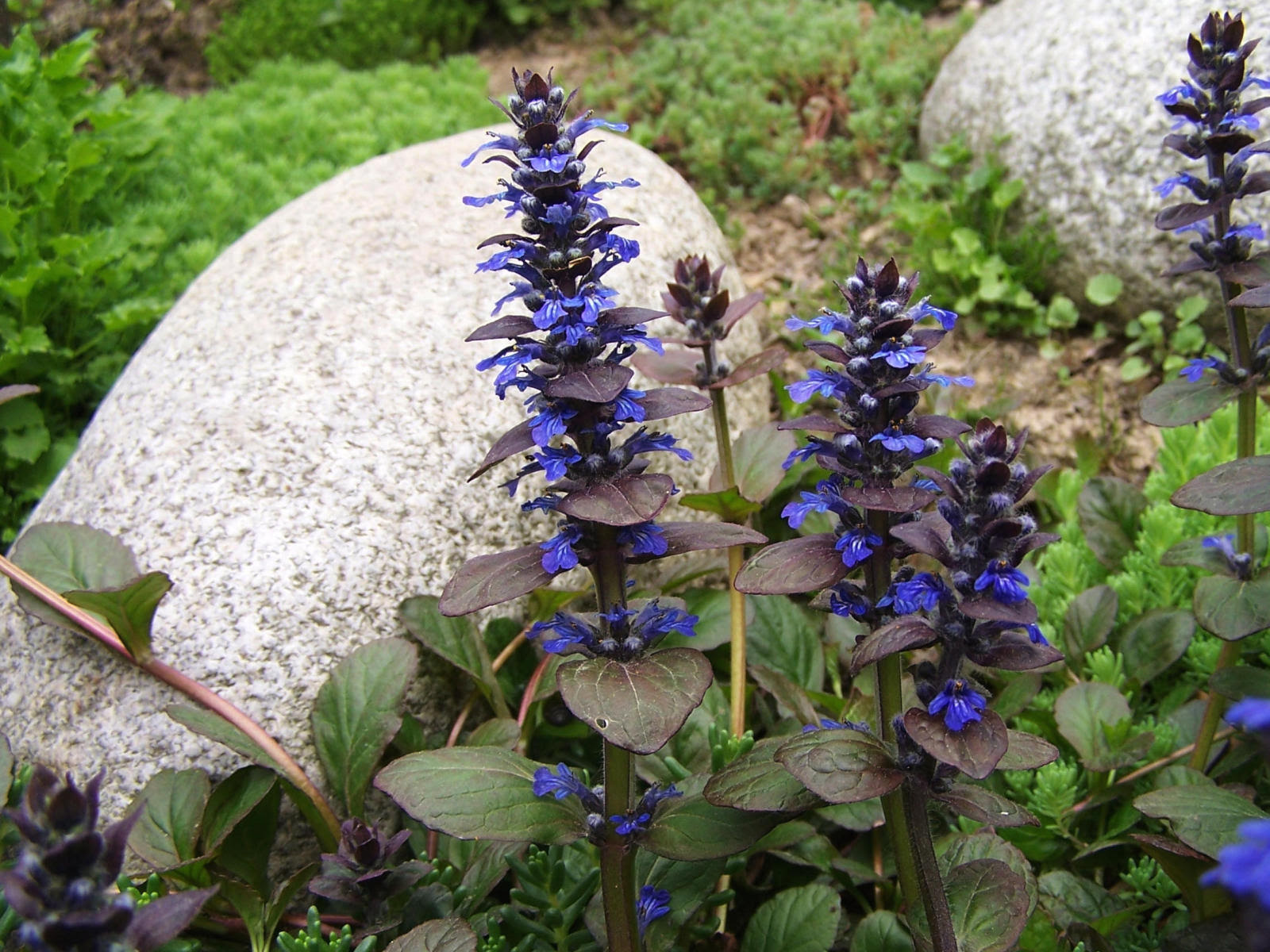 At the weekend I planted my new acquisition, ajuga reptans, under the small apple tree in my garden.  Its common name is bugle:           1. noun any of a genus (Ajuga) of plants of the mint family; especially : a European annual (A. reptans) that has spikes of blue flowers      2. noun a valveless brass instrument resembling a trumpet.  I remember the robin’s fanfare for my arrival this morning, and hope that bodes well.

*with grateful thanks to Arts Council England
Posted by Kate Swindlehurst at 05:26 No comments: