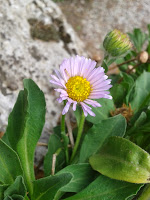 Kate's blog 'At Home' has moved to
a new location:: click here
Posted by Kate Swindlehurst at 08:34 No comments:

apples, aconites and all things autumn

This morning, cool and still, I breathe deeply as I cross the glistening lawn, sucking in the autumny air, savouring - what? - a tang of damp smokiness and that slightly sour smell of newly turned earth, so that immediately I'm back on school playing fields and the misery of impossible lacrosse in a biting wind.  In Second Nature, Michael Pollan suggests that a garden always casts a 'backward glance' for us, and the pull seems particularly strong at this time of year.  At twelve, organised sports were for me a chilly endurance test, but I recall with something like affection the massy trees - chestnuts, perhaps? - that edged the pitch.  Trees are on my mind at the moment: the tree surgeons have started work on the clump of towering Caucasian wingnut, pterocarya fraxinifolia, which straddles the stream.  The original two trees, both now gone, have produced an awesome thicket of stems and branches, but some trunks are quite hollow in places and all have woodpecker holes, apparently, so there will be some thinning, some felling - some to be left as standing poles - and all to be trimmed by five or six metres at the crown.  I guess tree planting necessitates a long view; but how quickly the shape of a landscape or a skyline can change! 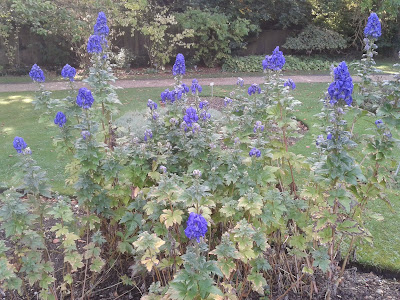 I'm easily distracted: by the Brookside gate and into the woodland garden, purple everywhere - aconites, I discover - and again in the systematic beds.  They're part of the ranunculaceae family - buttercups, I think - and yes when I check I find this is correct.  At last: one piece of new knowledge that has stuck!  The Latin ranunculus means 'little frog', apparently,  but I can't find an explanation of why this term has attached itself to the family.  Delphiniums belong to the same family, of course - I can see the similarities - and larkspur, although this part of the bed is empty apart from the label.  I have an idea that aconites are poisonous and yes, so poisonous I learn that aconitum is known as the 'queen of poisons'.  Other names are monkshood (the hood is clearly visible) and devil's helmet, wolf's bane (from the ancient use of toxins extracted from the plant to kill wolves) but also woman's bane (?!), leopard's bane and blue rocket.  Used widely if sparingly in medicine, especially Chinese medicine, from the mid-twentieth century it was replaced in the west by safer alternatives.  If taken in large doses, death is likely to be almost instantaneous.  It sounds perfect for the murder mystery - wasn't it Agatha Christie who said 'Give me a decent bottle of poison and I'll construct the perfect crime'?  Apparently she used aconite to dispatch several characters in 4.50 from Paddington.  Building on Christie's status as arguably the most famous resident of her native Torquay, Torre Abbey's head gardener Ali Marshall and her team have devoted part of their gardens to a display of poisons (including aconitum) and other plants which feature in her work.  Naive I know, but I feel that something so deadly (its poison can be absorbed through the skin if handled without gloves) ought to look in some way dangerous.  The bad that hides behind a fair face never ceases to surprise, though: remember Hamlet, so appalled by dissembling that he felt bound to make a note of his discovery that 'one may smile and smile and be a villain'. 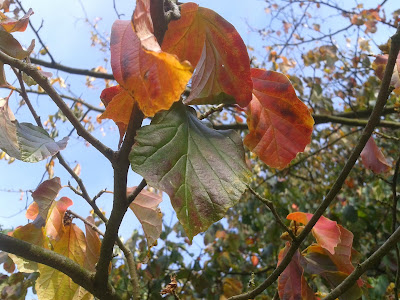 As far as I know there is nothing sinister in the lovely Persian ironwood, a stone's throw from the systematic beds and, I learn from its sign, head of horticulture Sally Pettit's favourite. A member of the witch-hazel family Hamamelidaceae, its Latin name parrotia persica is nothing to do with birds but is derived rather from the German naturalist and traveller Dr Friedrich Parrot who discovered the tree in its native northern Iran on one of his expeditions.  An impressive all-rounder in that rather disturbing nineteenth century way, a mountaineer who make the first recorded ascent of Mount
Ararat, he was also various kinds of scientist (professor of physiology and pathology and later of physics), a surgeon in the Russian army and an inventor of, amongst other things, a 'gasometer' and a baro-thermometer.  As for his tree, apparently in winter it's remarkable for its tiny scarlet flowers (see Judy Fox's description of them on 'snow-etched branches' at http://www.thresholds.org.uk/discovering-gems-at-the-botanic-garden/ ).  Today its leaves are turning, shades of peach and raspberry, claret and damson, mustard and ochre.  I prowl around the glade beneath its many hanging branches, running my fingers across its scaly bark, trying to test the theory that the only way to see a plant for real is from below.  This does give an extra something, some trick of the light perhaps, but every way up it's a spectacle worth stopping for. 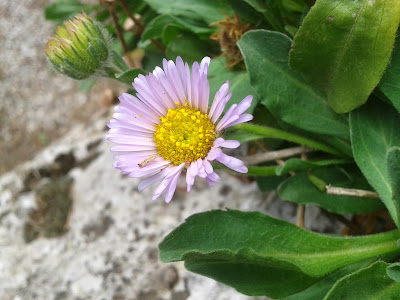 Another good place to loiter, I've discovered, is up towards the top of the limestone garden.  I perch on a lump of rock and watch.  A magpie flies through my field of vision - one for sorrow?  On the other side of the water, a crow wheels up the empty sky to the top of a pine.  Down on the lake, a mallard picks his clumsy way through the lilies, where the lily pads are now and again blown upright, ragged sails on slender stalks, plucky but precarious, holding up for a second or two before falling back like windsurfers new to the game.  Not so much purple here, although the spreading catalpa erubescens 'purpurea' to my left bears the colour in its name - I read that the leaves emerge deep purple before fading to their now delicate pale green.  Yellows and greens predominate, with a blaze of golden sternbergia lutea, lilies of the field and a small patch of what might be 'black-eyed Susans'.  There's a question of scale to contend with, too: like the tiny mauve aster (is it?) sprouting from the rock on which I'm balanced, many of the plants here are very small - a garden in miniature when viewed against the backdrop of the huge cedars on the other side of the lake.

Today when I arrive home, there's a fat little parcel on my desk.  I know exactly what's inside.  I tear at the tape and the layers of padded envelope until they're revealed, a pair of red devils unmarked by their journey.  They're from a tree that was assigned to me by my Cumbrian friends when they extended their organic veg garden to include an orchard, and these fruits are from their first harvest.  They're a deep crimson, fading to a warm salmony pink on the cheek and in the rays that radiate from the core, with roughened buff patches around the stalk.  When I bite into one, the flesh is white and juicy, with a pink blush beneath the skin, or staining, as if lipstick has transferred itself from a blood-red mouth.  It smells of summer and strawberries; the taste a hint of sour beneath a peppery sweetness.
Posted by Kate Swindlehurst at 10:22 No comments: