Not that I’ve been turning to the bottle (though there have been moments in the last week or so when that welcome glass of Malbec at the end of a day just hasn’t been robust enough).  More that I’ve found myself (of my own choosing, of course) on several occasions recently in situations that seemed – just too difficult.

Last weekend ought to have been one hundred per cent pleasure: two days in heavenly weather in one of the loveliest gardens (Tom and Sue Stuart-Smith’s Barn Garden near Kings Langley) I’ve ever encountered, in the company of experts in their field.   Organised by The Garden Museum, this was their first festival of garden writing.  I was charmed by Cleve West’s tales of life on his London allotment and entranced by Piet Oudolf’s emphasis on the narrative of the garden and the emotional response of those who visit.  Sunday began with a compelling address from Sue Stuart-Smith on ‘Gardens and the Mind’.  Drawing on her work as a psychiatrist and psychotherapist, she explored ways in which the garden can be a source of renewal and regeneration, replacing the impotence which often accompanies depression with a sense of agency although, ‘like the good enough mother, Nature never fails to remind us of the limits to our powers’.  Most exciting, though, in my book were readings from the three finalists in the garden memoir competition, sponsored by Granta.  All three had turned to childhood memories to explore the significance of the garden and all packed an emotional punch – interesting as, according to a publisher I met at the event, our interest in the affective aspect of gardens is rarely reflected in the literature.  Despite all this, at the end of the second day I couldn’t wait to leave.  Partly this was simply physical fatigue after two days on my feet (there was only a handful of chairs outside of the actual venues, and I’m always afraid that, if I succumb to the temptation to flop down on a grassy slope, I’ll never get up again.)  I was wearied also, though, by a kind of loneliness: the event promised ‘a friend’ and there were plenty of people who knew each other, but what is it about the English upper middle classes en masse which feels like a rather exclusive club?  It’s not one I belong to, for sure.

I’m not really one for clubs anyway, but the day before I’d been with John and Ellie from Camtango to give a talk and demo on our experience of Argentine tango and Parkinson’s to the local Parkinson’s society.  This felt like quite an ordeal: for years I kept my ‘condition’ (better than ‘disease’, though not much) as quiet as possible and until now I’ve avoided situations where I might be defined by Parkinson’s.  So it was a surprise to find I enjoyed the morning.  We were warmly welcomed and what we said and did seemed to go down well.  In the car on the way home, I remember thinking what I thought I already knew: accepting that I have Parkinson’s is not the same as letting the illness define who I am.  A hard lesson, but one worth learning.  Maybe I’ll go along to another meeting sometime.

‘Flowering Plant Families’, a five-day full-time course at the Botanics last week, was the hardest stuff by a mile.  I expected it to be difficult.  It’s almost 50 years since I day-dreamed my way through compulsory science lessons, longer since I’ve handled a microscope.  For the first hour or so I concentrated on the pronunciation of the Latin family names, marking the main stress on each in case I was called on to say it out loud.  In fact I quickly came to love examining plant parts through the microscope or even the hand lens although dexterity, one of the first casualties of Parkinson’s for me, made working with such fine detail a struggle, and every visit to the systematic beds a juggling act of lens, camera, secateurs, pencil.  I learnt a whole new vocabulary – don’t say flower, say inflorescence.  These aren’t petals, they’re sepals or even tepals – honestly!  I’m distracted by a fleeting memory of Henry Reed’s ‘Naming of Parts’.  ‘Are we allowed to call it a – pod?’ Rose asks archly.  I make notes, determine to stay focused.  Just as I feel I am beginning to make some progress, the afternoon session begins with an emphasis on how the old categories (sorry, families) can no longer be taken for granted; DNA has changed all that.  Still, I was thrilled to be learning – glad to be part of such a varied and friendly group, and the buzz of being encouraged to pick the flowers (well, examples) never quite left me.  The first day ended with dinner – good food, nice wine, a chance to get to know the other 16 – and I left full of optimism.

The next morning I woke feeling that I’d climbed a small mountain – no, a large one.  Everything ached; I felt exhausted even before I dragged my good old Hudson onto the road and pedalled off.  I thought I knew neurological fatigue.  I do now.  It got worse as the week progressed, until I began to wonder if I’d make it to Friday.  Don’t get me wrong: I loved, really loved, almost every tough minute.  Fortunately, too, I met a friend also familiar with chronic illness, so we grumbled quietly to each other and that felt like a big support – I hope it was mutual.  But I’m glad I pushed myself, far beyond what normally feels like the limit. Apart from anything else, all that sex going on under my nose and I’d never noticed!

Sunday evening now and after two days recovering I’m feeling more like myself, trying to sort what I’ve learnt into some sort of order and work out how my new knowledge, such as it is, will inform the writing I hope to do during the residency.  Rose sent me back to Alice Oswald’s extraordinary ‘Dart’, where the voices of all she met along its course emerge as the ‘mutterings’ of the river.  Stephanie reminded me of The Morville Hours, in which Katherine Swift uses the 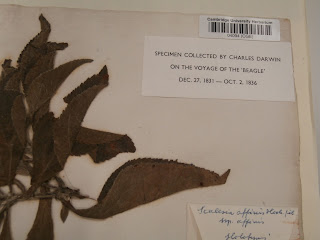 Hours of the Divine Office as a format for her garden story.  And I recall our visit to the university herbarium in the wonderful Sainsbury building on our last evening.  Amongst all that was astonishing – over a million specimens preserved over hundreds of years, treasures from Darwin’s Beagle voyage – the story of Mrs Meredith, a collector whose samples sent back to England from Australia went largely uncredited.  Some of her illustrations are there.  I find out she was also a published poet.  I’m excited by possibilities but rather overfaced by the size of the task.  I check my latest email from my mentor: ‘My first thing to say is I’m going to pressurise you about the journal form...’  Maybe the hard stuff is just beginning.  Where’s the Malbec?
Posted by Kate Swindlehurst at 13:46